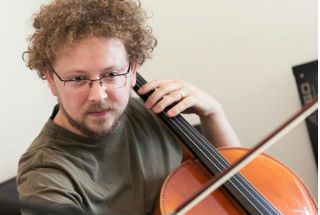 An Iowa native, David received early instruction in piano, cello, and guitar.  After a music-filled upbringing he attended the University of Northern Iowa where he studied cello, composition, jazz, and music theory.  As an Iowa cellist he performed with the Waterloo/Cedar Falls Symphony Orchestra, the Oskaloosa Symphony, and the Cedar Rapids Symphony.

David has been involved in many diverse musical endeavors in the Chicago music scene.  In 2009 he received degrees in music education and cello performance from Roosevelt University where he studied with members of the Chicago Symphony and Lyric Opera.  David has worked as a teacher, studio musician as guitarist and cellist, and with many theatres including Bailiwick Chicago, Theo Ubique, The Music Theatre Company, Pride Films and Plays, Harper College, and Morton College.

He explores numerous musical avenues such as rock, jazz, classical, new classical music, and improvisation and has performed at the Cultural Center, Green Mill, Double Door and the Old Town School of Folk Music.

Currently David teaches piano, guitar, and strings at Access Contemporary Music and at the Academy of Music and Art in Westmont.  He is also the orchestra director at St. Edwards School in Chicago.

David’s teaching philosophy: “The value of independence cannot be overstated. As a teacher I do my best to give all my students the ability to practice effectively both in the lesson and, more importantly, at home. I put a high emphasis on note reading as well as an understanding of music theory so that each student can be successful on their own. I strive to make each lesson a fun and exciting experience while maintaining a strong work ethic as well as encouraging a desire to improve and become a better musician. While I mainly focus on each student’s ability to play their instrument I also feel that it is important to let them experience music of the past and present for a broader sense of the vast amount of music that has been made and is being made today.”

We offer cello lessons to adults and kids age 4 and up using either the traditional or Suzuki methods of teaching. Beginners are welcome and our teachers are able to teach all musical styles.