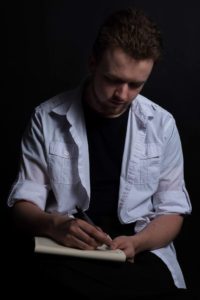 Hailing from Chicago’s north-side, Patrick Owen-Leary (he/him) is a composer/performer and singer/songwriting who pushes the boundaries of music in all genres. A product of the Old Town School for Folk Music and the Chicago High School for the Arts, Owen-Leary is a well-versed guitarist in the styles of bluegrass, jazz, rock, and classical music.
Owen-Leary received his B.M. in Music Composition and Guitar Performance from Baldwin Wallace University, where he performed in multiple productions of their highly-acclaimed musical theatre department. In the Spring of 2021, Owen-Leary completed his M.M. in Music Composition at University of Missouri-Kansas City, where he co-founded the new music group Crossroads Contemporary Ensemble (CCE).
Throughout his collegiate career, Owen-Leary has also been an avid songwriter, performing at venues across the City of Chicago. His career interests include songwriting, new music performance, and scoring for film and video games. His music can be found here:
FOLLOW